When it comes to Hollywood they’ve always seemed to miss the boat on what exactly snowboarding is all about. If you’ve ever watched their films sure there might be some quotable lines but they’re still far off of what the reality of living the snowboard lifestyle is actually about. Granted if you’re watching these films you’re doing it for the love of all things B rated and full of D list celebrities.

Case in point Out Cold, how realistic is it that people will defend their home mountain against some evil corporation and succeed. If anyone thinks this is real they fail to realize how big Vail Resorts, Intrawest, and Boyne Mountain Resorts actually are.

Now lets look at the cast here. The biggest name is Lee Majors and he’s famous for sleeping with Farrah Fawcett and some show from the 70’s about being a 10 dollar man or something. Then you have one of the London twins I can’t remember which one they both look the same so who really cares, but their best roll was as the stoner football player that can’t cope with being popular and has to get spiritual advice from Matthew McConaughey. Then there’s Zak Galifinakas he’s just funny and he gets molested by a polar bear.The best character in the whole movie is Stumpy and realistically all the memorable quotes come from him, David Koetchner should just have a sequel to the movie and call it Stumpy’s Revenge. The rest of the cast is pretty unremarkable, except we get to see Todd Richards as the super doctor whose legs got messed up in some extreme ski blade accident at the X games.

I have yet to figure out why people claim this movie as their anthem to move to the mountains. First I have never seen a muscle car with a plow on it ever, I have seen a 82 Trans Am that someone turned into a super swamper, but he also had a mullet that would make Billy Ray Cyrus jealous and drove a riding lawn mower to the bar every night. Secondly everyone that claims this movie as their anthem ends up working for the heartless corporation, which is just ironic.

The next set of movies are Shred and Revenge of the Boarding School Drop outs. At least here we get Tom Green who is a douche but can be amusing for slapstick juvenile humor and Dave England of Jackass fame. Plus Dave used to be a pro snowboarder so this could be closer to a real movie. Lest we forget to mention that Renee Renee of DC Mountain Lab fame is also in it.

Basically you have two washed up pros Dave England and Renee Renee that make a snowboard camp and coach some up and comers. Tom Green is the evil guy that is possibly gay with some little leprechaun who ski blades. There’s a bunch of product shots for Celsius, Rome, Drake, Northwave, Venue,Coal, Oakley, Sessions and Omatic. Whoever gave these guys a budget was stupid and the riding is such a joke. They make a big deal out of a “cornice drop” the thing is about 4 feet high and everyone falls off it. They didn’t even try to spruce it up and use a fish eye or something to make it look bigger than it was. On a plus there are boob shots galore.

I’m convinced that Dax Sheppard and Dave England are genetic clones as they both look the same and have a similar acting style. More played out resort town cliches take place. I’d also like to know where the 2034834847373 groupie women come from because the only time I see groupies in the mountains are at high profile events and even then those girls would be the ugly friend anywhere else. 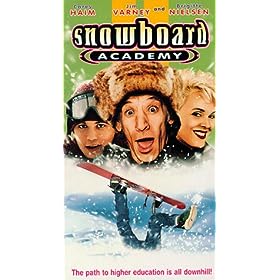 Continuing with washed up celebrities we have Snowboard Academy. Anyone like The Lost Boys? Yeah who doesn’t it has the two Corey’s in it and Vampires. Yeah well when Corey Feldman finally realized he was better than Corey Haim, the latter ended up doing this movie. Now on top of having a washed up 80’s teen star we get Brigitte Nielson and Jim Varney, yes Ernest P. Warrol was in this film. Think of it as Ernest goes snowboarding. 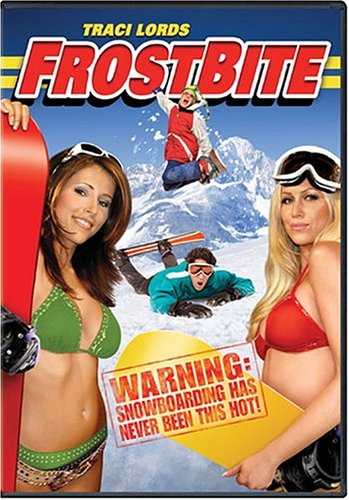 Frostbite is a classic gem of snowboarding exploitation. You get Traci Lords in this but sadly she doesn’t screw everything in sight she does molest a blind guy but that’s about it. She’s the big name attached with this picture. So this movie is like a cross between Out Cold and Animal House. There’s some snowboard instructor that’s like an evil Nazi drill instructor that drives people insane and pushed the hero of the tale to the breaking point to rebel against him and take back the mountain. Once again a lot of resort town cliches take place.

Extreme Ops was just another movie to cash in on the whole EXTREME marketing campaign. My theory is in a few years we’ll have Epic Ops or Core Ops as a sequel to this movie. Either way who really gives a shit. So we get the chick that played Veronica Vaughn in Billy Madison trying to save terrorists and Devon Sawa another washed up has been teen actor only he was from the 90’s not the 80’s like Corey Haim so he’s a bit younger. Needless to say mediocre acting with mediocre action.

Dipping into the horror section we get a movie that is Friday the 13Th at a ski resort. There are no D list celebrities that I could find associated with this film. Honestly I don’t even know what to tell you about this film. If you were a fan of Joe Bob Briggs when he hosted TNT’s Monstervision you’d probably get a kick out of this.

Now I know I’m missing some other horrible schlock that Hollywood has churned out at us enthusiast. Sadly the closest movie to really represent resort town life is Aspen Extreme and even that is still a bit off with a few things. So I’d like to know who has been brave enough to sit down and watch everyone of these moves and are there any in this category of crap I’ve missed that I should mention?