This is Flows entry into rocker and it was pretty solid.  Their bindings aren’t for everyone but they definitely have their place. Check out how it rode. 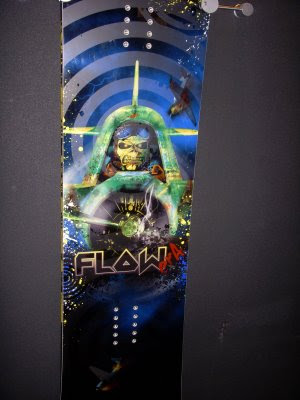 Preconceived Notions: This thing had better rock since it’s got Eddie on the top sheet.

Flex: Right around the middle of the road with a little stiffer torsional flex.

Stability: The board was super stable when flat basing I didn’t notice any real problems with it. Typical flapping you get because of rocker but that’s it.

Ollies/Pop: It could have popped better but it was still really solid.

Butterability: The rocker made it really playful for doing all sorts of variations.

Cruising: The edge hold wasn’t as good as I would have liked. It felt like it was skipping out on a few harder turns.

Jibbing: It locked in perfectly when pressing and was playful when spinning around on stuff.

Rider in Mind: Jib kid that demands slightly more from his deck.

Personal Thoughts: Other than it not popping as well as I would have liked and skipping out on turns the deck was solid. Plus come on it’s Iron Maiden inspired that right there gives it some credibility.

What They Say: Unfortunately I don’t have a catalog.

Binding Compatibility: The NXT AT matched up fairly well, probably should have gone with the FS though.

Binding Adjustability: Typically flow bindings take a bit of time to get dialed in. The rep did OK getting it done but it still wasn’t 100%

Straps: The power flex strap relieves any pressure you might get on the top of your instep and disperses it across the boot evenly.

Highbacks: Had a bit too much forward lean for what I would have liked but did its job.

Binding Flex: Past mid flex more towards being on the stiffer end of the spectrum.

Ratchets: The locking mini ratchets work well for adjusting on the fly and I had to use them once just to dial the binding in a bit more once on the hill.

Rider in Mind: Someone that wants an all mountain binding with easy entry.

Personal Thoughts: Flows do their job and have their place. I owned a pair of these a few years ago and they were solid and the upgrades are noticeable and do well.

What They Say: Unfortunately no catalog.