Bad Ideas In Off Season Training

There’s one question that people seem to consistently ask me when it comes to snowboarding, it’s something that seems to take away what snowboarding is. And that is, how do you train to be a good snowboarder? Truth be told I don’t train, my friends don’t train, we go out ride and have fun which is what snowboarding is about. Now sure in the fame obsessed culture we live in with Snowboard parents pushing kids to be the next Shaun White there’s an emphasis on training. Sadly there are people and companies out there hawking horrible ideas on how to train to be a better rider.

First up in the series of perpetrators of crap we have the Snowboard Jedi, offering up reworded wisdom of Yoda to convince you that if you think it you can achieve it. Here’s his introductory video which for myself makes me wonder if he plays a bit too much Star Wars Galaxies!

Now if you read his website this sentence should solidify that he in fact is a Star Wars geek, “It all started 5 years ago when I was watching snowboard videos over and over again in my basement.” The Basement the ever illusive hide out of geeks world wide, was it really your basement or your parents? Don’t lie to us here buddy.

Now there’s a few more priceless gems of quotes on his site. These are the type of things that remind me of the guy that sells the Slap Chopper or Billy Mays pawning off some over priced pile of poo. Check these awesome quotes:

You Can Literally
Program Snowboard Excellence Into Your Body

Since 99% of riders just go out and ride without any focus or realization that this information even exists, you’ll be miles ahead of everyone else.

If you even remotely believe in yourself, you need to ask yourself one question which is “Are you ready to change your riding forever?”

I think 99% of riders shouldn’t care about this crappy hoopla and go out and have fun after all that’s what it’s all about. The last quote for some reason makes me picture Patrick Swayze from Donnie Darko’s character with all his self help crap. Anyone else think the same?

So what we have here is a guy selling yourself on ideas that are present in yourself. I have a better idea instead of paying for advice that’s already present why not buy a lift ticket with the money you would have used and go out and ride, shut your brain off and just have fun.

Now does the idea of snowboarding self help stop there? Unfortunately we have yet another guy who fits the part of one of those mystical shamans that will lead you to inner enlightenment. Mr. Danny Martin who looks more in need of a cheeseburger and some pants that aren’t waiting for a flood spreads his thoughts on training. Be warned this is a long video that he has on you tube.

Here’s a list of myths that he tries to debunk on one page of his book:

You’re not learning if you’re not falling. (False)
Just have faith the-board will come around. ( and hit you in the head)
Steering with your lower body is the only way to turn. (wrong)

Now I’d like to point out that I fall a lot when I’m trying tricks, it’s something that has taught me that I need to fix what I’m doing to get it right. It’s like saying a toddler that is just learning how to walk can do it without falling down, it’s part of the natural progression of anything.

Only once have I ever had a board hit me in the head by putting faith it would come around and that was my fault more than anything. I really don’t know of too many people getting hit in the head by their own board when strapped in. Anyone have some stories they’d care to share about hitting their head with their own board?

He really stresses a lot of neck and head movements to get you to initiate turns. Anyone that rides will tell you throwing your shoulders around to turn and using your neck isn’t where the majority of the range of motion is for movement.

I think the cover of the book speaks volumes about the guy but that’s just me. 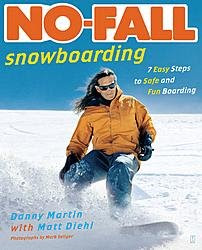 Now for a more hands on approach we have the Snowboard Trainer. I think this was solely created for those silly hard booters whose skis got stuck together. I think it’s one of those HUGE waste of money that someone with an engineering degree who occasionally partakes in winter sports created.

While they don’t offer any video of the snowboard simulation you can get the drift of how it works with this skier.

I think I’d be a bit worried about something that has Hockey nets at the end to catch me. Let alone while you’re simulating the concept of leaning into turns, that thing doesn’t look like it simulates bumps and transitions in the snow. Plus who really hard boots anymore?

I still stick to my guns the best way to get better is go out and ride, find people that push you and then you’ll progress. Anyone have any other bad finds in training they’d like to share?