Back in the day Rocket Reeves attached a door hinge to his back binding so he could get more tweakability out of it. Was it a great concept? Debatable at best and since it didn’t seem to catch on we could safely assume that it just wasn’t practical. Going with the whole theme of what is old is new again we have a company unleashes these bindings upon the snowboarding world again. Yes that’s right Pivit Bindings has risen to the challenge to add more moving parts to our bindings.

One doesn’t have to look any further than the photo of the binding in even its roughest form to say to themselves what the fuck. 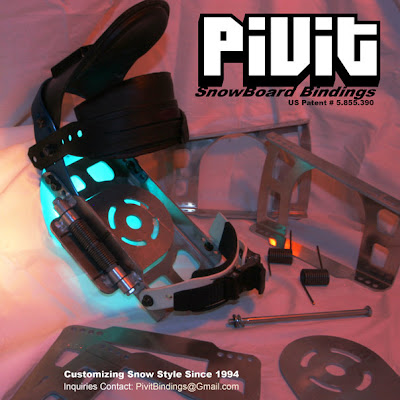 Yep that’s a hinge that’s mounted via your hardware. Even though this is a prototype anyone else notice a striking resemblance to the old morrow mounting disks? Those quarter circle slots are a true throwback right there. Now according to Pivit the reason for having a hinge on the outside of the binding is because, “Pivit bindings allow for Lateral rotation in regards to the snowboarders leg and foot angle as it aligns with the snowboard. In other words Pivit bindings allow the rider to pivot the sole of the foot around a pivot point directly on the Lateral side (outside) of each foot. Pivit bindings have a biased pivot mechanism positioned only on the LATERAL side of each binding which allows riders to achieve much more freedom of movement, especially while airborne, while still retaining tight, secure and direct energy transfer to the board edges for high speed carving.” 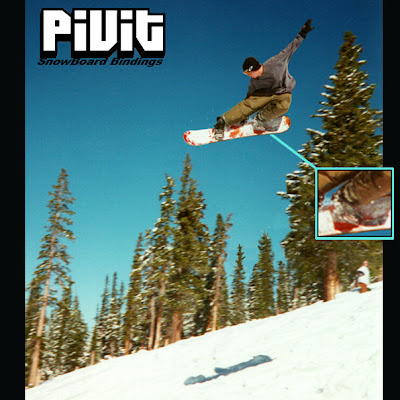 Now you’re probably saying to yourself OK that somewhat makes sense. But lets think about this a bit further unlike skiing we’re not meant to release or move from our bindings, this binding allows for outward movement of the knees and ankles. This lends itself for unequal movement, even if going for a super tweak. Think about if you’re coming down a little nose heavy that hinge is going to let you flex more forward than if you were stationary like with a standard binding. Granted that in the first initial uses that hinge will probably have enough retention to lock you in place, but over time it’s going to wear down and start to slip. Also looking at the spring you can see that it’s not covered from the elements and that’s going to pose a bit of a problem as well.

This is what they have to say about doing an ollie with their binding, “If you look at any good skateboarder tweaking a grab in the air or even while doing an ollie, you quickly see that having the ability to roll the sole of the foot off the plane of the board and increase the rotation angle of the ankles and legs is necessary and mandatory in order to achieve certain body positions to accomplish tricks. The human ankle allows for as much Medial rotation needed to achieve these moves but it quickly binds on the Lateral side and does not allow for the amount of ankle and leg rotation required.” The problem is that on a snowboard your performing an ollie by loading that tail up and getting the board to snap you not by slapping the tail down and sliding the foot forward. Even if utilizing an anti-cambered deck which is more skate styled in how you get the pop out of it this binding will be over kill.

Anyone else a bit stumped on why someone even created this thing? This lends itself to the theory that there’s too many people with too much time on their hands and not enough common sense. What’s your guys thoughts on this?