What’s it take to be a company that’s based on giving back to snowboarding and the world? Interesting concept and one that Humanity Snowboards is basing themselves on. Check out this upstart brand that has a different approach to having a team, being green, and giving back. This is their take.

You guys were going to launch this fall, it’s a rough time for every brand, what challenges do you foresee?

Well, actually, we just “launched” in June. We’re really going to do a full push and unveil the full package and make a more concerted push in late August / early September. We’re working with some people in the Snowflex community and some who travel South in the summer, so hopefully we’ll have multiple (or a continual) riding seasons.

I suppose the challenges for us are probably similar to those that any small business is going to face, especially in this tough economic climate. Fortunately, rumor has it a big winter is building for North America this season which would help keep that in balance. The biggest benefit we have is our factory. Most snowboard brands have to outsource their production, this can put strain on brands who need to meet minimums and run the risk of sitting on inventory. We can build what we need and put our machines to work for other companies as well. We’re just going to be smart with our money and do everything we can to reach out and create the community that we’re craving…all the other ish is just gravy.

Every brand has an image and a certain market that they cater to, what is the image of Humanity and who are you catering to?

Like we say pretty boldly on our site: only about 5% of the snowboarding population can ride at an elite status (and I think that’s being pretty liberal). But that’s inversely proportionate to the advertising, because I can safely say that at least 95% of all ads in the major snow pubs are featuring that elite class of rider. 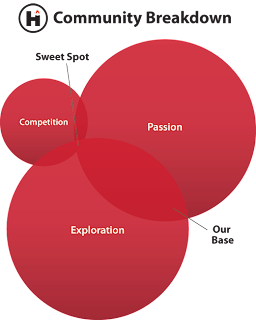 I think the name says it all. We are really focused on that remaining 95% of the population. Our team is already growing, and it’s not made up of highly competitive riders. While we do have some that compete, and some that did in the past, we’re not only about the podiums. Our main focus is to build a core group of loyal, dedicated, passionate riders. We are catering to riders who want an actual relationship with their board brand, the factory, the guys and girls building the boards.

Accessibility is possibly the biggest issue consumers face right now are you going to do anything to help get and keep people on snow, snowboarding?

You know, I’m not totally sure that I agree with that assessment. I think that 10 years ago that was definitely the case…maybe even 5 years ago. But currently, I think the biggest issue facing snowboarding is going to be our global economy.

We’re working our asses off to deliver the highest quality board for a budget price to help people get through these times. Hopefully the resorts and other gear companies understand that this is not the year to raise prices. This is the year to worry less about profit margins and more about keeping people on the slopes and riding.

As for keeping people “on” snow and snowboarding…we’re working hard to bring a whole new flavor into the mix. We have a few projects launching soon that hopefully work to unite the existing community and inspire interest in future riders and ski-defectors.

Tommy Czeschin is associated with you guys what’s his role going to be, any other former heavy weights joining your ranks?

Tommy is one of the three owners. Ryan (Monson) and I met Tommy a few years back, and we all really dug each other from the gate. Tommy is in love with the boards that Ryan builds, and we’re pretty enamored with the spirit and approach that Tommy brings to pretty much everything he does.

He’s going to be working closely with Ryan and I on R&D of new boards, shapes, layups, technologies, and some pretty badass new ideas we’re rockin’ for this coming winter. Tommy is our eyes, ears and face on the slopes. He’ll be the one helping local talent, and this season he’s got a big bug to get out and shoot tons of footage. Should be an epic winter watching Tommy break away from the pipe and kill it all over the mountain. 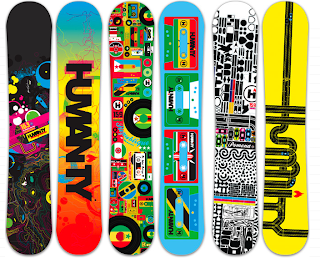 Is having an older rider who is more established integral to Humanity, and does this help perpetrate the idea that we should keep our older riders around rather than boot them for up and comers?

Who says we need to boot anyone? We’re not using anyone else’s model…ours certainly says nothing about booting people for any reason (other than for being a douchebag). There’s always room for veterans. Word around the industry is that many veteran riders are not getting sponsorship, or their current sponsors are not renewing, which we think is a huge mistake. Yeah, of course it’s true that going after the younger market makes good business sense, because the younger you can make a fan, the better. However, who’s navigating that ship? Who’s teaching that younger generation the ropes?

Funny you make the color distinction between green and black, because we’re all about hemp and bamboo, and not altogether sold on carbon fiber.

But for real, with regards to green initiatives, we’re really focusing on being as responsible as we can in each facet of our company. Because being green has so much more to do with overall approach to living and doing business than just throwing some organic materials into your boards – which we’re doing as well – it’s a paradigm shift. We try to reduce the overall footprint.

Ryan rides his bike 14 miles each way to work. I telecommute as much as possible, and Tommy is a damn hippie living up in the hinterlands outside Mammoth.

We’re also stretching beyond just the “green” movement, and starting projects that will create and raise awareness for the world beyond the snowboarding community. We’ve dedicated ourselves to being 1% for Kiva lenders – giving 1% of all we make to this amazing micro-lending community that connects small funds to entrepreneurs in developing nations all over the world.

Right now everyone is playing with their camber options, are you going to be offering up anything that is different than traditional camber? Also what are your thoughts on this anti camber trend, here to stay or just a fad?

Yes, we do have reverse camber boards available – we’re calling them “Smile Tech.” Reverse camber boards are popular right now and with the shift in riding style reverse does make sense for a lot of people. I think that to call it a fad is a bit naïve. We shouldn’t forget Barfoot Snowboards, they were rocking reverse camber back in the day, and if this was just some passing fad, it would not have been resurrected.

We’re finding that these days many riders have a quiver of boards, and a reverse cam board is just one of the ones in the quiver. The conditions and the type of riding for that day will dictate what board they’ll ride. Interestingly, our Smile Tech is very mellow. There are many companies who are trying to get super crazy with implementation of their engineering in this regard. We’re keeping it subtle and functional, because we feel that’s the best way to enhance the riding experience. Trying to combine multiple camber technologies into a single snowboard seems foolish to me. That’s like trying to make a street rod and a dune buggy on the same chassis.

A few seasons ago, you guys were doing a brand called Axia, what’s the story behind that? Is Humanity the evolution of what happened over there?

Well, that was just the wrong people at the wrong time. We all walked away from that kinda sore, and Ryan and I (who have worked together since 2000) decided we needed to hit up Tommy and see if he wanted to start a new company together. So, I guess Humanity was birthed in Axia’s death…but this certainly isn’t an evolution.

I see you’re a member of Kiva is this your way of giving back and helping out society in a world that seems to want to keep taking?

Absolutely. I’ve been lending through Kiva for a couple of years now, and I think it’s the coolest thing around. We all talk about how the rest of the world lives in squalor and unthinkable poverty, but really, we should open our eyes and think about it. Micro-lenders, starting with Grameen Bank in Bangladesh all the way to the online community of Kiva, they’re all making it quite simple to put money that is just sitting in your savings account (which is probably earning a nominal percentage on the dollar) into the hands of someone who is working hard to climb off that bottom rung.

We all can change lives, and we should. Remember, the average snowboard you buy ($400) is about twice the per annum income of someone living in Tanzania. We pay $400 for our boards (let alone all the other gear), and that is twice what the average Tanzanian makes in an entire year. This isn’t about making anyone feel guilty or ashamed…we just need to keep things in proper perspective. We need to remember that shit is for real. Be conscious.

If people get one thing from Humanity Snow what would you like that to be?

We’re a company that makes excellent snowboards and that’s building a loyal community of riders concerned about the world we live in. (I know that’s more than one thing, but everyone cheats, no?)