Earlier today there was a bunch of buzz floating around the Internet with the launch of the new Burton site. Being the biggest and most prolific company in snowboarding it’s a given that this would generate some serious interest. With the launch of the new site more peoples interest in the up coming winter is sparked and the wheel sets forth in motion. Now it wouldn’t be a Burton event with out some kind of controversy behind it, because lets face it when you’re the largest most recognizable brand in snowboarding it’s going to generate many different view points.

Now you’re probably asking yourself how can a company launching a new site cause any controversy? Well it didn’t just start with the launch of their site it stems back to earlier in the year when they had announced they would be discontinuing having links to authorized dealers websites and would instead sell direct. So now not only is Burton the most over distributed brand to brick and mortar stores but it’s also severed ties with it’s product to product vendors. Now they argued that this is their attempt to control their online distribution because it had grown to a level that was uncontrollable. More or less their response to the fact their order minimums were so high the level of sustainability collapsed and their products ended up at Sam’s Club and Cost Co via the grey market.

Now here’s another thing to look at, we’re in a recession. Almost every company is finding a way to drop prices, help retailers, help consumers, and generally try to keep people interested in snowboarding. Now along saunters Burton and and offers up some of the most expensive boards in the world. The Vapor has a price jump up to just twelve hundred bucks and the new Method is a mere fifteen hundred dollars. Everything gets a bit of a jump in price across the board in every facet of production with them. Also in the greatest marketing scheme to lock you into their products more boards with that great infinite channel system. As one of the readers said to me the only way to buy Burton is going to be to wait till the end of the season to get it at a decent price. More shops are going to eat it because of these actions.

While there’s some funny video’s of the great camber and rocker debate. It has essentially become one giant flash in your face buy this gear promotion. All it truthfully needs is for Vince from the Slap Chop to come out spewing about how the Custom slices, dices, butters, nutters, and slays it all in that over bearing over the top persona! 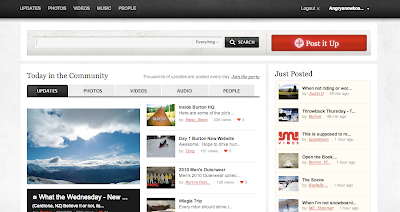 Even their long established community has gotten a drastic facelift. It’s become an amalgamation of other social networking tools and sites that have become common place. The lay out looks like an over indulged wordpress blog with elements of Twitter and Facebook. Upon further inspection it has one of the least user friendly interfaces I’ve personally ever encountered and seems to be going the route that Snowboard.com went when they became the Colonies network. All anyone has to do is take a look at the defunct community of Snowboard.com and others like it MTN OPS and see that this isn’t the route to go. The most notable change is the lack of the message board. The new lay out lays no mention to the former lawless message board. Is this their chance to create that semblance of a welcoming community the former failed at doing because it lacked any guidance? Or is Burton ostracizing another group of their loyalists?

On the retail side of things you have numerous shops getting the shaft and on the web side of things you have a group of retailers getting shafted along with a community that has been around for almost a decade or something like that. Now think about how many of these shops and people helped build the Burton name only to get written off. As a shop kid Burton always preached to me how we’re all friends and part of this big community. Let me tell you this from experience positionary friendships are a bitch and that’s exactly what Burton has executed with the moves they’ve made. We only cared about you when we had something to gain, when times got tough and we got greedy you were the first to be thrown under the bus.

On a plus note as many of you readers have stated they’re stimulating the economy by driving consumers to buy from other brands. What does everyone think about all the changes is it good, bad, or a sign of the snowboarding apocalypse? Has Burton officially jumped the shark?