Is snowboarding really for the young?

Getting older is a fact of life and something we have to come to terms with. Your face starts to show signs of age, you don’t rebound as quick from a hard fall, daily pains seem to be common place, and the list goes on. Which leads me to ask the question of is snowboarding really a young persons sport?

I look at the list of pro’s that inspired me to ride and most have gone on to other things outside of snowboarding, while a few still remain. It’s undeniable that when you’re riding at that caliber that your body gets hammered hard. Every year you hear about so and so is the new ______ and then a year after that where are they? More than likely eaten up and spit out.

Kids in this day and age have more benefits than ever for progression. Snowboard camps, woodward, trampoline camps, better equipment, and the list goes on. To be young and have 0 responsibilities with those options is amazing.

Lately it seems though that there’s a trend of older riders still killing it. Guys that are past what some consider their prime. You look and Todd Richards, JP Walker, Peter Line are all still killing it. These are guys that have proven themselves over and over but still keep on riding and doing it strong. It’s just funny to see how many companies now are keeping riders around that are well aged compared to ones that are wet behind the ears. Is it a part of a mentoring program? I don’t know. 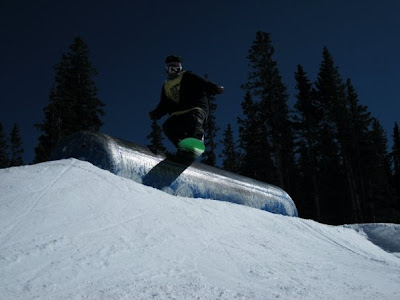 Darren Reithmiller one of Breck Park Crews Finest still killing it and getting older every day!

It seems like more and more regional teams are picking up older riders to represent the companies. Maybe its a level of maturity or responsibility that persists? Perhaps as I mentioned above they’re helping mentor the younger generation coming up? Either way its great to see that you don’t turn 25 and suddenly you’re a has been.

Then you look at how many recreational riders there are out there who keep pushing themselves. You have to give credit to someone that’s 45 and still riding as hard as they can or even just picking up snowboarding and pushing it.  Every day you can see more and more people over 50 out shredding it up.  It reminds me of the fact that at every USASA event Eddie Wall Sr. would roll in and throw down hard.  Guy was like 55 still competing and winning.

>Hell I’m 26 and I’m riding park harder now than I was when I was 16.  Age definitely is only a number that effects the mindset.
>
Age and snowboardinggetting oldermediayoung riders