For those about to Rocker I salute you

Rocker, Banana, Reverse camber whatever you feel like calling it is pretty revolutionary. That is something I can’t dismiss at all. But I have to question how many companies are making it solidly and how many are just jumping on the bandwagon.

This winter I’m making it a priority to get on the Ride Crush, Capita Horrorscope, Nitro Subpop, Signal Park series, Artifact and Notch 1985, and the Burton Hero. I’ve ridden a decent amount of rockered boards already so I’ll be curious to see how some of these compare. The big thing I’ve noticed is how many people were quick to basically rip off the K2 design of how its done, which is all fine and dandy but you run into the problems that K2’s rockers have, like having to stay centered.

The thing I don’t understand is putting rocker on the softest jib sticks on the planet. Is it really necessary to take a board that is softer than a liquid turd coming out of a dogs ass that just ate ice cream? This is the question that plagues me. Having ridden a lot of the regular versions of some of the jibsticks out on the market I really have to question what the hell the designers are thinking.

Case in point this video here of the Signal Snowboards Park Rocker. The park series is by far the softest board I have ever ridden and yet it has rocker. Check out this vid to see how rediculous they get.

Now I’ve heard mixed things about the Capita version thats coming out. To me and from seeing this picture below I believe its very similar to K2’s, but the guys on snowboard.com seem to keep saying that its more like how Never Summers is with the mini cambers after the inserts. Either way it’ll be interesting to see how this rides, since I believe the Horrorscope is based off the Stairmaster a board I personally like. 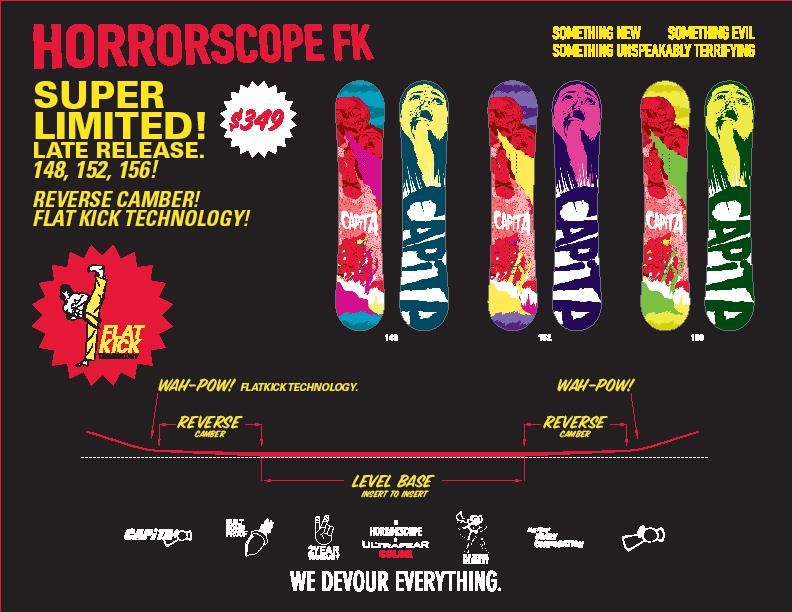 Now Nitro is utilizing a concaved base with rocker between the feet and a flat tip and tail. Doesn’t that sound very similar to another company based out of the PNW? Hmm interesting right?

“In addition, the board features our DRIFTER BASE, which is a convex base shape in the binding area which blends into a flat base toward tip and tail. We were the first to offer this feature several years ago on the T0, and enhances rail performance. The base is “dished” .25 of an inch resulting in a looser feel and catch free jibbing. You can lean into your tricks like you do on your skateboard.”

Looks like about 4 more weeks and I’ll be able to get on some demo’s of these and get some reviews posted up.