We have the anti-camber revolution going on right now, sure it’s not necessarily a new idea but one that’s been rehashed with an update in technology. In the ongoing debate of what’s new and what’s old there’s always someone that throws out that dual camber has been used for a while. So what exactly is dual camber and who is using it in their anti-camber designs?

Inca snowboards is the forefather to this technology and while their brand is pretty much all but extinct their website still lives on for those that are so inclined to check it out. Basically it’s an independent camber zone under each foot creating a U between these two areas. 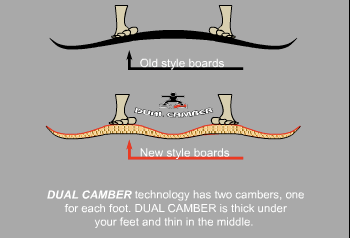 A lot of people seem to associate what Inca was doing with Never Summers R.C. Technology. The descriptive wording might be similar but if you look at where Never Summer puts their cambered sections you can see it’s not even close. They utilize a micro camber after the inserts in both the tip and tail. It’s very minimal in stature. The new Banana C2 is very similar to this as well since it’s utilizing the same concept that Never Summer created.

The closest to what Inca started is the Gullwing rocker by Nitro. Looking at Inca’s design and seeing what Nitro is doing in person you can tell that it’s very similar. Independent camber zones for each foot (even if Nitro claims it’s just after the inserts), a slight reverse between each camber zone, and all the other descriptions are similar. The big difference is the drifter base that bevels the edges of it upward. When people are referencing dual camber this will be the closest present option.

So what are the benefits of this dual camber? Check out this picture from Inca’s website to get an idea. If you want an idea about how Nitro’s version rides check out my review of the Sub Pop late release. 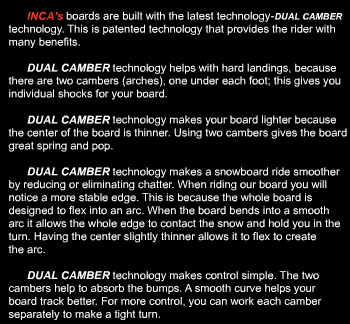