For those that don’t know Burton is doing a late release called the Hero. It will feature a 3 stage rocker similar to K2’s and every other company jumping on the band wagons. The other day I got to check one of these out in person and would have to stay I’m stoked a bit to try it out. So I really don’t know how its a late release when the season hasn’t even started.

When I put it on the floor and did the propeller spin I realized that the rocker wasn’t as defined as others I’d played with. The sidecut utilizes Burtons PDE (pressure distribution edge) which is a 1mm bump out in the edge. Similar to the Never Summer Vario power grip when I looked down the sidecut I could see these subtle bumps. Now my theory on rocker is that you need this to help the board grip better and reduce catching an edge as much.

Hand flexing is pretty blah so I usually just straddle the fucker and see how it flexes when I’m lunging my nether regions into it. They claim it as a 4 on their chart but I think it was a bit stiffer probably closer to my Revolver R. 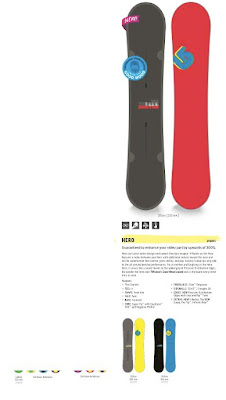 Burton
HERO
Guaranteed to enhance your video part by upwards of 300%.

Meet our latest rocker design and newest freestyle weapon. V-Rocker on the Hero features a rocker between your feet, with additional rockers toward the nose and tail for superhuman foot control, press-ability, and pop. Buttery Scoop tips only add to the all-around boosted performance. For as mellow and forgiving as the Hero feels, it carves like a sword thanks to the added grip of Pressure Distribution Edges. No wonder the Hero won TWSnow’s Good Wood award and is the board every tester tries to steal.

I’ll hopefully be getting to ride this in early November at Loveland.