Battle of the Base Technologies: TBT vs BST

Here’s two little companies Bataleon and Omatic, both doing their own thing, and both with their own technologies. Some might say they’re similar, some might say that one is ripping the other off, but truth is both are very different. So where do these two technologies stand when matched up in a battle? Does one outweigh the other in being the better? Here’s a breakdown of the differences between Triple Base Technology and Bowed Surface Technology.

Lets start by looking at the obvious, the actual bases. Both give a raise at the contact points, but only Omatics runs tip to tail. This eliminates the transition from flat into a angled base. Triple Base has multiple options on how defined it is and also covers a wider surface than what Omatics is offering. B.S. Technology is maybe an inch to two inches wide with no transition to flat between the feet, think of it being closer to a V while T.B.T is closer to a U when you look at it head on. The other big differentiation is that Omatic actually mills theirs into the core, while Bataleons is pressed in. Does that effect anything? I’ll let you decide. For now I’d give this round to Bataleon only because they came out the gate with having a raised base like this.

If you’re like me you’re all about having reverse camber in your decks. No matter who says Bataleon is a rocker or the originator of the anti-camber revolution it’s not either of these, they still utilize a traditional camber in their decks. You still have to load and unload it giving it a different ride entirely. Omatic gives you reverse camber making it more playful and skate inspired. The Bataleon has better pop due to this, but over all the reverse camber makes the board easier to press, ride in pow, and butter your muff. Being that everyone wants a board that’s reversed or rockered, I give this round to Omatic. 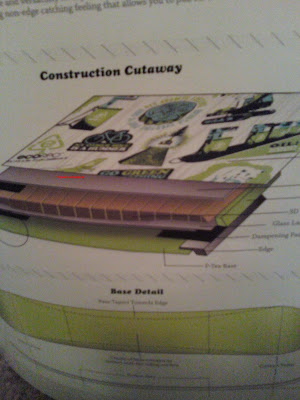 Going back to the differences in the base definition we have to evaluate which one effects turns more. Both allow for a fluid roll from edge to edge, that’s a given. T.B.T has gotten a lot better in recent years, some of the first generations when you would do this you’d feel a slight grip at the transition from flat to where the bevel starts. The new generations have a lesser definition to them, but it’s noticeable on certain models. B.S.T is so minimal in both the width of the flat spot and the bevel that you just transition from edge to edge without any catch that I’ve found so far, also there’s no flat spot between the feet so you have a consistent bowed surface. I’d give this round to Omatic for having a non-transitional base.

Overall I give this to Omatic for embracing both a new base and camber theory. Would I rule Bataleon out of making an anti-cambered board with TBT? No, the possibility for them to tweak their camber design is right there and they could definitely step into that genre. What do you guys think, which would you say is better?