So Snowboarder Magazine is putting together the inaugural America’s Next Top Pro Model Contest up at Windells. Lampooning the institution that is Tyra Banks and America’s Next Top Model they’ll pit two dozen pro riders and their pro models against each other in a duel to the death! No actually it won’t be a duel to the death but it will be to see whose board reigns supreme.

Fortunately for us it’s not going to be a reality show where one unknown shred gets called up to the level of prodom, nor are we going to be left with a bunch of over inflated reality celebrities trying to continuously milk their fifteen minutes of fame. This is what they have to say about the contest:

Now SNOWBOARDER is challenging any and all riders with their name adorning a topsheet to put their money where their signature is with the first annual America’s Next Top Pro Model.

Windells Snowboard Camp is the place to be July 18th and 19th as two dozen of snowboarding’s top pros put their pro models through the paces in six disciplines to determine whose board can’t be beat. On-snow events include Longest Railslide, Highest Ollie, Chinese Downhill, Spin to Win, and Biggest Halfpipe Air with the contest concluding with a charity auction at the Windells camper sale to determine the most valuable pro-endorsed deck. 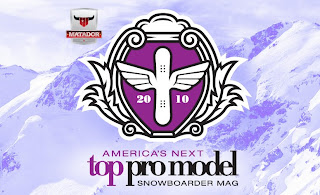 Now it seems that this would be more amply called America’s Top Pro Rider instead. This also opens up the question of does the board make the rider or the rider make the board? That’s a legitimate question that should be addressed. Perhaps it would be better if they took all the pros and made them ride nothing but first generation snowboards, that could be amusing, or even better would be having them create some sort of snow sliding device and then compete on it (lunch trays, toboggans, etc.). You’d think it’d be a bit more creative than taking some pros that compete and throwing them into a competition riding their decks to begin with.

Honestly how many people over the age of the average camper their pandering to really let the name on a deck influence their decision to buy it? Does the significance of a pro model really appeal as much as it once did? It seems that they’re making this contest out like one of these riders and their decks will be the best board ever. What do you guys think?