It’s always interesting to head home and see how things have or in my case haven’t changed. But the greatest part about being back riding the old stomping grounds was all the memories that pop into your head. While riding up the Yodeler chair at Holiday Valley I was reminded of one of the funnier things I’ve ever witnessed. Sure everyone can say they have a great chair lift story but this one definitely stands out at being at the top of the list with such contenders as the guy that lost his pants at Vail earlier this season. 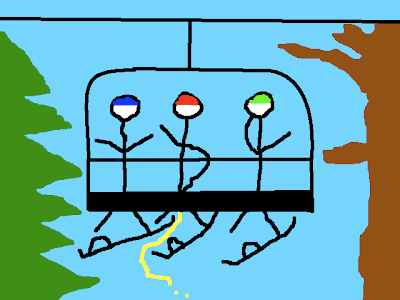 o the left I present you with an artistic rendering done by myself of the events that transpired on that cold winters day.  It was another glorious day in the season without end and we were rolling deep in our typical pack mentality.  Our group was always easily spotted and always overly boisterous when together which made for a merry time for ourselves and probably traumatized more than one or two people.

On this day I was riding the chair with myself on the left side, Jordan in the middle, and Spacey on the far right.  As the bull wheel slowly pulled us towards the top of Mardi Gras there was a slight lurching motion then that ever present stopping.  Now who knows why we stopped or what may have caused this, for we were somewhere in the middle to high up to see if it was below us and too far down to see if it was at the top.
As we sat there getting pummeled by the beautiful moisture ridden lake effect snow Jordan was getting just a tad bit antsy.  I looked at him and said, “What’s the problem bro?” He looked up at me and with a sense of anguish said, “Dude I gotta piss or I’m going to explode!”  Well seeing as Holiday Valley only offers seven hundred and fifty feet of pure vertical awesomeness I looked back at him and said, ” We’re only 3 minutes away from the lodge my man, you can hold it. ”  To which is reply was, “I’ve been holding it for an hour I figured we’d take a break soon I’m going to piss myself.”
Now I don’t know if you’ve ever experienced a teenager pissing themselves, but it is not a good thing.  So I reassure him the lift will get moving shortly and then he can venture off into the woods and unleash the yellow snow maker of doom.  He seems a bit more comforted at this thought.  Luckily for my Spacey is on the other side of Jordan and also doing his part to keep him occupied so as to not think about the gallon of piss in him that needs to come out.
We’ve now been sitting there for 15 minutes waiting for the chair lift to start up again, when a yellow jacket skis under the chair and lets us know that its going to be a while before things get moving as something mechanical had broken.  So there I am contemplating the fact Jordan is probably going to piss himself when I hear, “Fuck it I’ll piss from the chair!”  To which Spacey and I replied in unison, “What?!?”
Jordan looks at both of us and says, “Guys when you gotta go you gotta go.”  Now I can normally agree with this as I was once spotted pissing off the deck of the half pipe in an alcohol induced stupor.  I look at Spacey and he looks back and me and we give each other that nod, you know the one of OK well I guess its going to happen and we can’t do anything about it. Jordan looks at both of us and says, “Guys don’t look this is going to suck.”
So as Spacey and I turn away we hear the sound of his zipper opening up and what might have been a micro version of Niagara Falls coming from his crotch.  He unleashed a fury into that cold snowy day like nobodies business.  I could hear the rest of our posse yelling from all four of the chairs behind us and I knew this was going to draw some attention.  Sure enough behind them stood another yellow jacket starring straight at us.  Now not knowing if it was anyone we knew I urged Jordan to hurry it up.  His only response was, “Its coming out as fast as it can!” Great thats a relief here we are suspended in the air with everyone watching you piss.
While he was finishing up releasing the inner beast the chairlift lurched forward and started moving.  I urged him again to hurry up and either finish up or pinch it off.  But as anyone knows once you start with something of that ferocity you don’t ever and I do mean ever pinch it off.  By now we’ve moved to where the lift operator at the top can see what’s going on and he’s on the phone making a call.  Now I’m thinking, “Oh shit we’re definitely getting in trouble for this one”, but luckily for me he was just calling down to make sure the chair was OK to keep running.  By now I hear the zip of Jordans pants and I look over at him and he has a slightly perturbed look on his face and says, “Dude I pissed all over myself but I feel great.”  I look down and surer than shit there’s piss on his pants, his board, some on Spacey, some on my board and I’m thinking what the hell dude don’t you know now how to aim.
As we unload the chair I can see the yellow jackets chair coming up to the top and I’m thinking we’re in for it now.  As we start skating off to make our way to somewhere where we could probably hide, although I don’t know where you’d hide as there just isn’t enough terrain to do so, I looked back and noticed that he was skiing off in the other direction.  At that moment a sense of security swept over me as we had just had a potential crisis averted.
By now everyone in the group had rolled up and was asking him why the hell he had done it. His only response was,” well I know you guys would have done it if you had been in my situation.” The funny thing is he’s right if I was ever in that situation I know I’d have pissed off the chair as well.
FunHumorlift storiessnowboarding